Where the Borges Are

Alex flashes back to his last days in Vietnam, when he and his team fought to hold a strategic position – and when, surrounded by 100 corpses, a dark spirit awakened within him to claim his soul. He snaps back to the present as Spencer discovers that Deputy Winters was killed by being injected with drain cleaner, while Damon Landry was shot up with sodium pentathol (‘truth serum’) and Mary Fishwick… well, she’s faking unconsciousness. Tony slaps the semi-coherent old woman around for answers (which is kinda messed up) and she says that Mr Simplicity and her daughter Jenny came into the house through the shadows while the Borges were gone. Simplicity killed the deputy and drugged Irene; Damon tried to fight back but Jenny drugged him – and then pretended to drug Mary. They questioned Irene and Damon about a sword, then left through the shadows with Irene.

What sword? Mary confesses that she saw a swarm of shadow crows attack the Landry house nearly a week ago. She came across the street to find Isaac Landry dead, an old cavalry sabre in his hand; she instinctively took it home and hid it under the fire she’d been burning since her daughter left, and she’s barely slept since. She begs Spencer to save her daughter from dark powers; he promises he will, and persuades Mary to rest inside his van’s magical hiding space where she’ll be safe. As he seals the van, he realises for the first time that the magical symbols etched into its frame by his parents look somewhat like Arabic script. Disturbed, he looks through his collection of ‘witch notes’ for information – and what he finds is a old letter in his mother’s handwriting that was hidden among other papers. 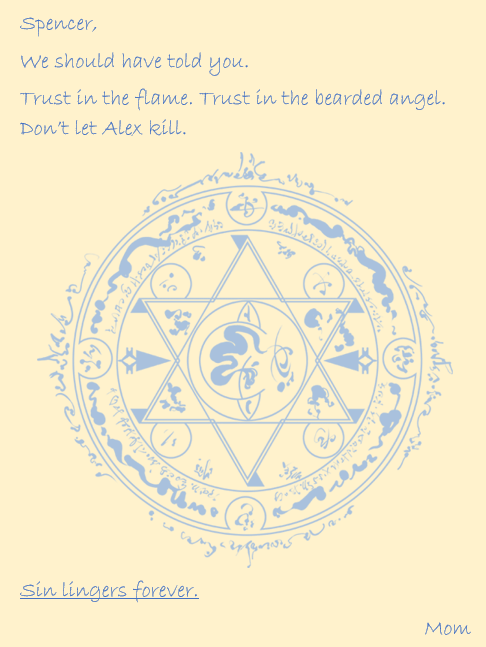 Duke and Tony head to the Fishwick house and find the sword; Stephan Corbeau emerges within Tony’s consciousness to confirm that it’s his sabre – the one his lover used to kill his brother 100 years ago – and Duke enhances it with his magic. They return as a semi-conscious Damon asks why Alex destroyed his leg, and his life, when they were teens; Alex doesn’t answer, but shuts Tony down when he attempts to stick up for his little brother. The mood deteriorates as Spencer suggests that their parents were responsible for Alex’s condition, and gets even worse when Duke tells Damon that they killed the Rougarou – the monster the young man had dedicated himself to defeating. 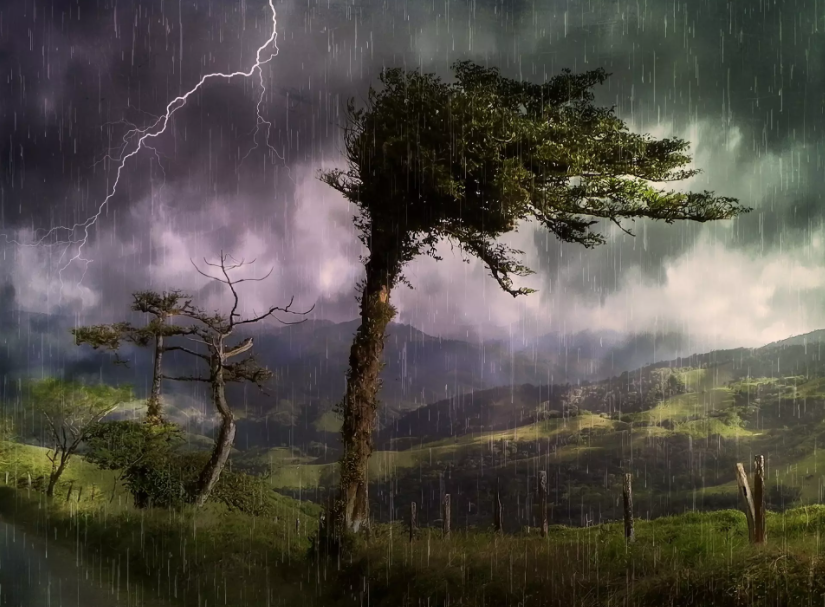 The Borges descend (once again) into bickering. Repulsed by the idea that the family van could be connected to the darkness within him, Alex steals a car from a nearby house, shrugging off Tony’s offer to drive – and Tony realises that alligators, snakes and swamp vermin are creeping into Crow’s Roost under cover of the pounding storm. Duke vents his frustration by playing music in the Landry’s shed, and has a vision of the ruined Corbeau Plantation House, where Eduard Corbeau waits for them. Spencer gives Damon the option of coming with them to rescue his sister, but he’s too debilitated by the drug (and by Duke’s boasts) to do so. Instead, Spencer angrily focuses on corralling his family and heading off to confront Corbeau – but he doesn’t tell them everything on his mind.

For he suspects that the magic circle depicted in his mother’s letter could be used to bind a daeva within the faravahar (‘bearded angel’) statue taken from the museum. One daeva – which means he must choose between trapping the shadowy Nâi-Batar, the source of Corbeau’s power, or the terrible murder-spirit within Alex…

Ascendant campaigns can view previous versions of their pages, see what has changed (and who did it), and even restore old versions. It's like having a rewind button for your campaign.

We've already been saving your edits, so if you upgrade now you will have instant access to your previous versions. Plus, you have our no risk refund guarantee , so there's nothing to lose.

When We Were the New Borges Session 13

The Borges Light Up Session 11

I'm sorry, but we no longer support this web browser. Please upgrade your browser or install Chrome or Firefox to enjoy the full functionality of this site.